In an effort to get off of Microsoft Office, I have been trying to use alternatives instead. OpenOffice Writer and Calc have been very competent substitutes for Word and Excel. But, every once in a while, I need to make some diagrams for a feature spec. Would OpenOffice Draw work instead of Visio? 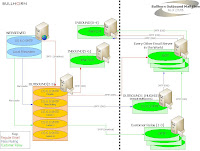 A typical Visio I might produce is a collection of clip art, shapes, text, connectors and arrows. The diagrams themselves might be anything from how SMTP traffic flows from our system, over the WAN and back again, to data-center architecture, to the internal workings of a particular piece of code. They may even include UML.

Visio comes with a clip art library that includes various depictions of servers, routers, networks, etc. By default, OpenOffice has a very limited library. However, there is a great royalty free library available called Open Clip Art. It's somewhat of a pain to install on Windows, but it was dead simple in Ubuntu; just search for "clip art" in the package manager GUI. 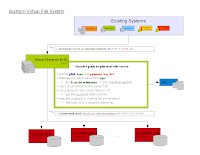 Actually using OpenOffice Draw was a blast. It just feels like a modern, intuitive application. Granted, I'm not a Visio power user, but I'm hard pressed to find anything that Visio does that OpenOffice doesn't do. Draw even has some of its own features, like exporting to PDF. Oh, did I mention it was free? 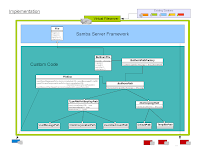 In the end, I was totally satisfied with what I produced in OpenOffice Draw. While neither Visio or OpenOffice try to tackle UML diagrams, I was able to throw some together in Dia, and them import them into Draw.